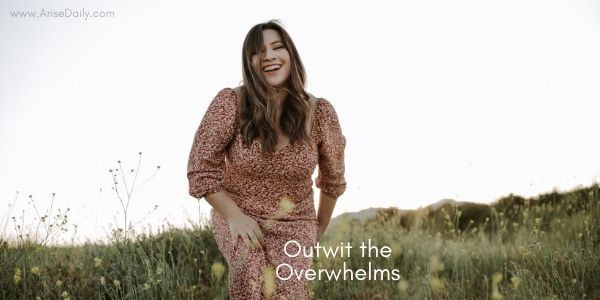 Imagine with me the sweet moments motherhood, of tucking our little ones in at night with soft moon-glow as they drift off in peaceful sleep. Reality shatters the quietness when little feet pad down the hallway. “Mommy, I need a drink!” says the bright-eyed preschooler in the doorway.

The elementary student pops out of bed. “I forgot to tell you something. I need black pants for the school program tomorrow.”

Ugh! Exhaustion and exasperation set in, erasing the sweet moments.

Later, in the middle of the night, the baby screams from intestinal discomfort. A massive blowout needs attention. After tending to the baby, it’s hard to fall back to sleep, thinking about tomorrow’s to-do list.

How do we cope with that overwhelmed feeling?

This passage helps us conquer the “overwhelms” in several ways.

By focusing on doing our best for the Lord—pleasing Him and not others—we avoid heaping on extra mommy-guilt.

Psalm 90:12 (NIV) also helps us outwit “the overwhelms”: “Teach us to number our days that we may gain a heart of wisdom.”

At the end of the day, reflect on Psalm 61:2-3 before drifting off to sleep. From the ends of the earth, I cry to you for help when my heart is overwhelmed. Lead me to the towering rock of safety. Psalm 61:2 (NLT)

About the author: Nancy Kay Grace enjoys the outdoors and zip lining. She is a speaker and award-winning author of The Grace Impact, a devotional about the touch of God’s grace in our lives. She has contributed to several Chicken Soup for the Soul books, The Upper Room devotional, as well as online and print magazine articles. Nancy loves sharing stories of God’s faithfulness and grace. Please visit http://www.nancykaygrace.com to sign up for the monthly GraceNotes devotional newsletter.

Join the conversation: What overwhelms you? 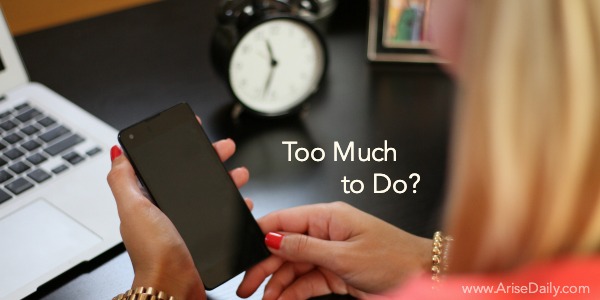 From the ends of the earth I call to you, I call as my heart grows faint; lead me to the rock that is higher than I.  Psalm 61:2 NIV

Are you feeling today that there is just too much to do?

I remember a time in my life when I felt like I was drowning under the pressures of being a woman, wife, mother, director of women’s ministries, friend, sister, and daughter. There was so much to do to keep up with family relationships, to keep up the house, to keep up with my job, and to keep up in my walk with God. I literally felt I was drowning in obligations, and continually coming up short.

Today I know that when I feel like that, I’ve taken on more than I was intended to bear. And most likely, more than God wants me to bear.

In Matthew 11:28-30, Jesus gave this invitation: “Come to me, all you who are weary and burdened, and I will give you rest. Take my yoke upon you and learn from me, for I am gentle and humble in heart, and you will find rest for your souls. For my yoke is easy and my burden is light” (Matthew 11:28-30, NIV).

Jesus recognized the people of His day were carrying burdens too heavy to bear. So, He offered them His burden instead – a burden He said was light. What is the burden God places on us? What is the one thing He requires of us more than anything else?

God’s greatest requirement of us was not to do things for Him. It was to love Him. And not to just love Him, but to love Him passionately, desperately, above any other person or thing.

When I consider loving Him as my highest obligation and my heaviest burden, it makes all the other things I think I have to do pale in comparison. My to-do list, my project at work, my financial dilemma …. none of those things is as important as loving my God. And therefore, I truly can take His yoke upon me and find rest. There is anxiety and stress in striving to carry my own burdens. There is peace and rest in loving Him.

Lord, for all the times I start to feel weary and weighted down, help me to remember Your invitation to come to You, lay my burden at Your feet, and find rest.

About the Author: Cindi McMenamin is an award-winning writer and national speaker who helps women strengthen their relationship with God and others. She is the author of 17 books including When Women Walk Alone (more than 130,000 copies sold) and When a Woman Overcomes Life’s Hurts. For more on her books and ministry, or for free resources to strengthen your marriage, parenting, or walk with God, see her website: www.StrengthForTheSoul.com.

Cindi’s book, When You’re Running on Empty, is written for Christian women who give of themselves relentlessly. What can a woman do when she’s running on empty? Learn how to renew your energy and passion and press on.

Join the conversation: How do you refresh yourself when you feel overwhelmed?

But seek first his kingdom and his righteousness, and all these things will be given to you as well. Matthew 6:33 (NIV)

A few years ago, I came to the point of a computer crisis. My current computer became a serious source of irritation in my life. Not just the ordinary, I-hate-technology moments we all have, but the big I’m-going-to-have-to-wipe-the-hard-drive-and-start-over sort of situation.

To be fair, it wasn’t even a real computer, it was a netbook. I’d had it for just over two years and I had used that little machine hard. It logged as many travel miles as I had and, for a PC, had been a truly trouble-free machine. And up until the past few months, I’d been thrilled with its performance. It had always booted up quickly and gone from application to application with lightning speed. Even now it ranks as one of the favorite computers I’ve ever had.

But then that all began to change. At first I thought it probably had something to do with a virus or spyware or even cookies. So I ran every diagnostic tool I could find and discovered it was free from any digital disease.

One thing all my diagnostic digging did reveal was a very full machine. Its open memory space was rapidly disappearing. Where once it had room to perform, now its life was cramped and overloaded. Its performance had dramatically decreased, and if it were a person, I’d even go so far as to say it had become chronically cranky. Its bad-tempered disposition was due to the fact that I expected it to do things it was never designed to do.

Because it was originally so efficient, I kept piling more and more on it. I moved all my work life to its hard drive because it performed so well. And, until it became overloaded, it just quietly processed my requests. Now, my only option was to wipe its hard drive and start over. And, to be totally honest, I really didn’t have the time to spare.

Why didn’t I have the time?

Well, it turned out I was suffering from the same sort of malady as my darling digital offspring. While I considered what to do with this machine, God began to draw some obvious parallels within my own life. That had been a banner year for me, but with my successes came with a dump truck full of opportunities.

For some, that would be a good thing. For me, the queen of I-can’t-say-no, it developed into a nightmare. My own life had become overloaded, and my performance had begun to suffer. Where once I finished projects early, now I struggled to complete them on time. I was suddenly driven by deadlines and distracted by details. And the only answer was take a little time do a serious reboot to my life.

I took the time I needed to plug back in to my Creator and let Him remind me of the special things He designed me to do. I wiped my life free of everything I wasn’t suited for and it made all the difference. Just like my computer, I was once again able to work with plenty of room to breathe.

King David wrote: “…when my heart is overwhelmed: lead me to the rock that is higher than I” (Psalm 61:2). I encourage you to spend time in God’s presence asking for discernment in prioritizing commitments. Use this summer to readjust your life back in line with what God designed you to do and watch the difference it will make in your life.

About the author: Find your voice, live your story…is the foundation of Edie Melson’s message, whether she’s addressing parents, military families, readers of fiction or writers. As an author, blogger, and speaker, she’s encouraged and challenged audiences across the country and around the world. Her latest book, While My Child is Away; Prayers for While We’re Apart is available at local retailers and online. Connect with her further at www.EdieMelson.comand on Facebook and Twitter.

Join the conversation: With what ways do you discern whether or not to commit to something? Have you ever found yourself overcommitted?

Photo by energepic.com from Pexels