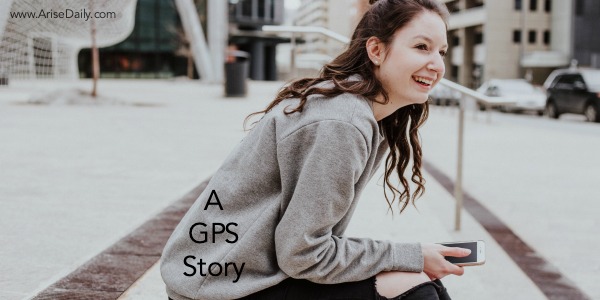 Since Global Positioning Systems (GPS), have become so common, nearly everyone has one in their phone or built into their car. These systems are so sophisticated; the nice lady’s voice can guide you to just about anywhere. And if you accidentally take a wrong turn or exit, it’s okay, she’ll just recalculate and guide you around to the correct road and back onto the right path again.

My friend Paula and her sister were on a road trip in Maine. Her sister drove, and Paula navigated with the help of her phone’s GPS. They were driving at night and didn’t want to try to add the hotel as a destination in the dark, so they decided to use both of their phones. Paula set her sister’s phone with the directions through the city, then set her own phone with the hotel directions. The first GPS successfully directed them all the way through the city. Paula then switched phones, activating her phone’s GPS for the pre-set directions to their hotel.

After passing through the city, the lady in the phone directed them to take the exit, so they did. Paula thought it weird that they would be exiting so soon, because the picture on her GPS said the turn was still another mile and a half down the road—but they obediently followed to oral directions.

As soon as they took the exit, the lady guided them around and back onto the highway. Once on the highway, she told them to take the exit again—and they did. Then again, as soon as they exited, they were guided back onto the highway. It happened three times. On the fourth time, as her sister was obediently about to get back on, Paula shouted, “Don’t do it! Just pull into this gas station, so we can see where we are!”

Once under the light, Paula could see her sister’s phone in her lap, right under the one she was holding. She had forgotten to end the navigation to the town after passing through it, so the first GPS kept trying to take them back to the city. The two GPS’s had the exact same voice; they thought they were both coming from the phone in her hand.

The competing voices had them driving in circles.

I don’t know about you, but I’ve had competing voices trying to take me in circles as well. Sometimes we all just need some clear guidance. It might be in relationship choices, work related decisions, or family matters. Sometimes it’s hard to tell which voice to listen to and which way to go. There are a lot of voices coming at us at the same time and they can all sound pretty convincing.

In order to get on the right road, I’ve had to get into the light of God’s Word. The Bible is God’s GPS (God’s Positioning System). Psalm 119:105 NIV says; “Thy Word is a lamp to my feet and a light to my path.” God’s Word is His voice, and it brings clarity. When you’re in need of guidance, no matter what your situation, He has the answer.

I don’t mean to sound trite, but if we are Christ Followers, so we need to follow Him—learn of Him and have His heart for His people. We do that by listening to His voice and following His instructions. He will never lead us astray. So, today, switch off the conflicting voices, get out God’s Word, His GPS, and listen to the only voice who will lead you in the right direction to a blessed life.

About the author: Terri Clark works with women to prepare and equip them to receive God and the blessings He wants to produce in their lives. She began to answer God’s call on her life in 1994 and has since impacted women all over the world with His news of salvation, edification, and healing.

Her book, Fanning the Flame: Reigniting Your Faith in God, identifies and addresses the issues which most affect a believer’s spiritual flame: the busyness of life, Christian service, pride, and worldly temptations. Join her in this pilgrimage and reignite your spiritual lamp with a fresh, empowering faith–a faith that will stand through a time of testing.

Join the conversation: What voices are trying to get your attention? 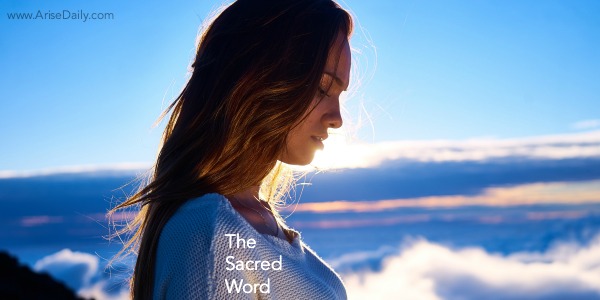 It was another time—a time when the reading of scripture and prayer were not only permissible but encouraged in the public school. Miss Mary Dell Ard was my fourth-grade teacher, and she was an old-fashioned schoolmarm. Never married, she dedicated her life to teaching children. She called every student “precious,” even though she may be at the same time applying the rod to the child’s backside. (That was permissible and encouraged in those times as well.) Every morning our teacher would read from the Bible, and hers was so overused that she had to hold it together with a substantial rubber band.

One of the few times she embarrassed me by reprimanding me in front of the class was a morning after I had been assigned to take the lunch money to the cafeteria. I had left the room after the Pledge of Allegiance and had re-entered while she was still reading from the Bible. My desk was a mere two steps from the classroom door, and so when I re-entered, I went directly and sat down.

Big mistake. I had forgotten that it was a sacrilege to move about at all during the reading of the Word. The rule: If one enters a room as the Bible is read aloud, one must stand perfectly straight and still until the end of the reading and throughout the following prayer. This was the law, and I never broke it again. Because of this lesson, I still feel the need to be reverent and still whenever the Word is read.

Psalm 119 is a LONG song included in the psalter. No one knows who wrote it, but some believe that it was a priest from Old Testament times. The entire 176 verses are dedicated to the importance and sanctity of God’s Word. The synonyms the psalmist uses for the Word are precepts, laws, decrees, and statutes. The Word is described as eternal, firm, and enduring. This lyric emphasizes that God’s Word is for direction, for teaching, for understanding. It is mostly addressed to God, so it is functionally a prayer. The writer commits to obeying it, hiding in his heart, meditating on it, and delighting in it.

I’m sorry to admit that I haven’t always done this regarding the Word. I’ve read it and believed it most of my life, but have I always consulted it when I needed instruction or consolation? No.

Verse 28 says, “My soul is weary with sorrow: strengthen me according to your word…”  In times of sorrow and frustration, the Bible is often the last place we want to go for help. Why? “[We] have strayed like a lost sheep…” (Psalm 119: 176) Most of the time, the Word will tell us things we don’t want to hear:  trust Him, obey Him, and surrender to Him. When we’re suffering, often we don’t want to do any of those things.

When I resist the instruction of the Word, I remember Miss Ard and how she taught me that the Bible is sacred, worthy of my respect, and my go-to for everything I need.

Read it, cherish it, and embrace its truth.

About the author: Nan Corbitt Allen has written over 100 published dramatic musicals, sketchbooks, and collections in collaboration with Dennis Allen, her husband of 40 years. A three-time Dove Award winner, Nan’s lyrics and dramas have been performed around the world. Dennis and Nan have sold almost 3 million choral books.

Nan and Dennis live in Cleveland, GA where she teaches English and Creative Writing at Truett McConnell University. They have two grown sons and two beautiful grandchildren.

Nan’s book, Small Potatoes @ the Piggly Wiggly, is a collection of devotionals that reveal the great impact seemingly insignificant, routine experiences can have in our lives. She describes what she learned of God’s providence and wisdom while growing up in the Deep South in the 1950’s and 60’s.

Join the conversation: What does God’s Word mean to you?