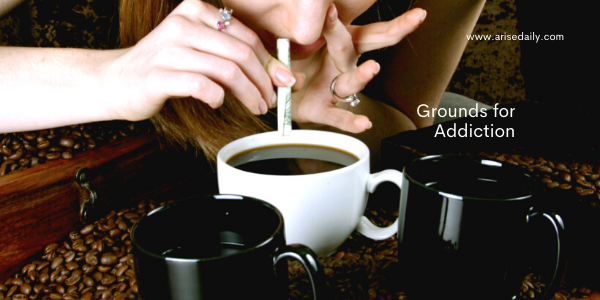 So, because you are lukewarm, and neither hot nor cold, I will spit you out of my mouth. Revelation 3:16 ESV

I was stuck with the overnight shift in the Navy.

Sleep was an unwanted intruder. If I allowed myself to doze, I would go to jail (rules of the Navy).
I had to drink coffee to stay awake. I hesitated. I hated the taste. But after a few nights of fighting to stay awake, I had to succumb.

That jolt of Java promised to keep me awake. That slap in the face from a dark brew kept me alert.
Jail or Java? A simple decision for me. After a while, I began liking the taste. I even longed to go to work to get a drink. I confess, I am a coffeeholic. It seems I cannot get my day started without it. I look forward to my morning Joe the night before.

K-Cups are my favorite. Whoever invented the Keurig is my hero. Hot coffee at my fingertips one cup at a time. That is Genius!

I tried doing without that jolt of java, but I got a headache. I know that is a sign of addiction. I know I am not alone. Are we bad people for needing this wake-up call every morning? I don’t think so. Why there are shops created just for our addiction!

One morning, I had forty-five minutes to myself. I wanted to grab my cup and fellowship with God. I long for that time, before the sun rises, to read the Word and sip my coffee. I grabbed my cup from under the spout. What? An empty cup?
I forgot to put the water in the machine. Now I had to wait all over again.

UGH! My quiet time was disintegrating because I did not follow proper Keurig procedure! I made sure everything was set. K-cup in. Water added. Cup under the spout. Push the button. Wait…

Yes! A hot cup of pure joy. But at my first sip, I quickly spit it out. Rather than a warming swallow, it was lukewarm. Have you ever tasted lukewarm coffee? YUCK! No one likes lukewarm anything.

At that moment, the Spirit reminded me of the church of Laodicea in Revelation 3. God hates lukewarm.

Laodicea was known for its lukewarm water because it was located between the hot springs of Hierapolis and the pure, cold water of Colossae. Some scholars believe the metaphor for hot and cold came from Laodicea’s location. The Laodicean church was criticized for their lack of zeal for the Lord. The English language refers to those that are neutral or indifferent in matters of faith as “Laodicean.”

As I finished my new cup of hot coffee and pondered the message, I asked myself: Was I half-hearted in my service for Him? Was I giving God only portions of my life? I asked the Lord to show me where I’m lacking zeal for his kingdom. My little coffee fiasco had proven to be a great reminder to serve him with a wholehearted devotion and a willing mind.

Will you join me and be a zealot for Jesus?

This article has been brought to you by the Advanced Writers and Speakers Association (AWSA).

About the author: Cherrilynn Bisbano is an award-winning writer in both fiction and non-fiction. She is a coach, ghostwriter, editor, and speaker. She is honored to be a member of AWSA.

You can find her published in several online magazines and blogs along with books.  Her latest book, Shine Don’t Whine, released in October 2020. Cherrilynn proudly served in the Navy and Air National Guard. She lives with her son, Michael, Jr., and husband of 22 years. Cherrilynn loves Christ, Chocolate, coffee, and Cats. You will often find her on the beach sea glass hunting.

Join the conversation: In what do you struggle to be zealous for the Lord?

The world can’t hate you, but it does hate me, because I accuse it of doing evil. (John 7:7 NLT)

I used to work in cubicle maze. The only creative writer in our international company, I touched pretty much every project that our mostly female marketing department produced. If you’ve ever worked in a group of women, you already understand the tension.

Historically, groups of women working together in close quarters don’t get along well. We were fortunate in our little team because for the most part, we did. But there were some strong personalities, that’s for sure, and sometimes, they got sideways with each other.

Three of the gals who all did similar jobs were all in a row. The ladies on either end of the row had very different working styles and personalities, and they sometimes clashed. The gal in the middle generally refused to take a side. So, we had a long-standing joke in our department, that her cubicle was Switzerland. We even took it so far to buy her a miniature Swiss flag to hang up as a symbol of her neutrality. Looking back, I’m so thankful that we could laugh about it.

I mean, I was with her, honestly. Whenever there’s conflict or the potential for conflict, you will find me hiding from it. Conflict exhausts me. I hate it.

But the longer I live and the darker our world grows, the harder it is to find neutral ground. And there’s a reason for that, my friends. Believers aren’t supposed to be neutral. We’re to be peacemakers, yes, but being neutral and making peace are two completely different ideas.

I was reading John 7 for a study I’m doing, and I found this statement that Jesus said to his brothers before He left Galilee for the Festival of Shelters in Jerusalem.

“The world can’t hate you, but it does hate me because I accuse it of doing evil” (John 7:7 NLT). Cue the mic drop, right?

Ever wonder why? Was it His miracles? His personality? His popularity?

No, I believe it was because He spoke the truth, and the truth is never neutral. Truth, by its very nature, is exclusive. As much as our culture and our world wants to claim that truth depends on the person, they can’t. Truth is either true or it’s not. And when we plant our flag there, we will experience hateful backlash, just like Jesus did.

That’s why it’s important to remember that the world hated Him first (John 15:18). But does the world hate you? Or are you neutral? Jesus stood for the truth. He didn’t bend just to make others feel better about their foolish choices. He didn’t make excuses for evil. He faced it with compassion, kindness, and love, but He was relentless and unyielding. People could say what they wanted about Him, but they could never say He was neutral.

Believers, we’re here for a reason. We are His ambassadors, called to represent God to the world, and too many of us blend in too well. I get it. I love blending in, but I’m not called to an ignorable life. I am called to be holy. Loving, speaking, and living the Truth will make me stand out. A life like that can’t be ignored.

It’s time to stop hiding. It’s time to speak up. I’ve been on neutral ground long enough. I’m standing on holy ground now, and I intend to tell the world.

About the author: A.C. Williams is a coffee-drinking, sushi-eating, story-telling nerd who loves cats, country living, and all things Japanese. She’d rather be barefoot, and if isn’t, her socks will never match. She likes her road trips with rock music, her

superheroes with snark, and her blankets extra fuzzy, but her first love is stories and the authors who are passionate about telling them. Learn more about her book coaching services and follow her adventures on social media @free2bfearless.

Join the conversation: How do you know if someone is a Christian? What makes them stand out from the crowd?