Praise be to the God and Father of our Lord Jesus Christ! In his great mercy he has given us new birth into a living hope through the resurrection of Jesus Christ from the dead, and into an inheritance that can never perish, spoil or fade. This inheritance is kept in heaven for you, who through faith are shielded by God’s power until the coming of the salvation that is ready to be revealed in the last time. 1 Peter 1:3-5 NIV

I don’t believe it’s true, but someone once told me that a house perpetually and perfectly well-kept is a sign of an “uninteresting” life. Again, not true. But for people who believe it, I might be one of the most fascinating people they’ll ever meet.

Sometimes, to get inspired to get my house in order, I look up cleaning and organizing tips on Pinterest. Next thing I know, I’m thinking about D-I-Y-ing something amazing. It has nothing whatsoever to do with cleaning my house, but still. It’s not like I can’t use one more idea for building a grill gazebo—that will never, ever happen.

At some point I do realize I have to get real and tidy up. I was gathering shoes from the family room one time and chuckle-whined to my daughter, “Your dad has three pairs of shoes in here.” Then, “Mercy! Two pairs of your brother’s shoes over there. Ten man-shoes in one room!”

My daughter, who is always at home with the clever comebacks, answered, “In my father’s house are many man-shoes.”

Even at its tidiest, my house? Never uninteresting.

It’s even more interesting that, spiritually-speaking, we live in an ever-messy world. Not just a bit of disorder now and then. Not simply a little dusty here or there. Fallen. A place where immorality and depravity are a lot closer to the norm than right living and love for God. In all its messiness, our world doesn’t merely avoid loving God. There are those who are passionate in their attempts to remove His influence. It’s not exactly “mansion, sweet mansion” here.

Jesus really said, “In my Father’s house are many mansions: if it were not so, I would have told you. I go to prepare a place for you. And if I go and prepare a place for you, I will come again, and receive you unto myself; that where I am, there ye may be also” (John 14:2-3, KJV). It’s a passage that thrills our souls. Not the man-shoes—or even the mansions. It thrills because in the midst of dealing with the mess of this world, we’re reminded of the treasure of living in the presence of God.

I do love the thought of a place “prepared.” A clutterless place far removed from everything messy. Better yet, there’s a reception. “I will receive you to myself.” What will make heaven the sweetest home? We’ll be “received”—by Jesus.

In an untidy world, dirty little distractions can threaten to sidetrack those of us who seek to faithfully follow Christ toward that reception. It’s vital that we not allow any of the world’s mess to block out the glorious eternal.

A few verses later, Jesus says, “I will ask the Father, and He will give you another Counselor to be with you forever. He is the Spirit of truth. The world is unable to receive Him because it doesn’t see Him or know Him. But you do know Him, because He remains with you and will be in you” (John 14:16-17, HCSB).

That’s how we focus and follow:  His remaining presence! The same Lord who promises to receive us indwells us by His Holy Spirit. Oh what a gift His presence is. For the hope of our glorious future. For life here and now.

For the organized—and also for those of us who are, let’s say, a little too fascinating.

TWEETABLE
I’ve Got a Mansion, Just Over the Grill-Top – encouragement & humor from @RhondaRhea on @AriseDailyDevo (Click to Tweet)

About the author: Rhonda Rhea is a TV personality for Christian Television Network and an award-winning humor columnist for great magazines such as HomeLife, Leading Hearts, The Pathway and many more. She is the author of 17 books, including the Fix-Her-Upper books, co-authored with Beth Duewel, and the hilarious novels, Turtles in the Road and Off-Script & Over-Caffeinated, both co-authored with her daughter, Kaley Rhea.

Rhonda and Kaley have just released a new novel, Off-Script and Over-Caffeinated. When the Heartcast Channel Movie division announces they’ll briefly be allowing submissions for new Christmas movies, Harlow finds herself paired with a reluctant co-star. Jack Bentley may be the biggest Heartcast Original Movie name in the business, but he is anything but formulaic.

Join the conversation: What are you looking forward to the most when you get to heaven?

No eye has seen, no ear has heard, no mind has conceived what God has prepared for those who love Him, but God has revealed it to us by His Spirit…” (1 Corinthians 2: 9,10 NIV).

Margaree Harbor—the name slid off my tongue like a spoonful of ice cream on a hot summer day. We were in a time before online reservations and photos, but the name on the advertisement had me envisioning a perfect get-away on Cape Breton Island, Nova Scotia. The details described it as situated on a hill facing the harbor. I imagined beautiful lights, moonlight shimmering on the water, and yachts skimming along the sea or peacefully docked in their berths. Yes! It sounded like the perfect romantic stop along our journey.

However, as my husband, Jim, and I arrived to our destination, we saw no people and no houses. We thought the city must be in the other direction, so we again tried to follow the map, all the while thinking…surely this is not the place. As gravel pebbles popped beneath our car tires, we viewed the “harbor”—a dried up ravine with an abandoned, rusty, fishing boat lying on its side, a string of colored Christmas-tree lights swinging from bow to stern. No water in sight, but lots of weeds.

Then we looked up the hill to a tall, narrow, frame house with dingy, white-flaking paint, the windows askew, and a sagging front porch. Jim, and I looked at each other and struggled to smile. We double-checked the address. Yes, this was it.

When we gained the courage to knock on the front door, a man in overalls answered and cordially showed us our room upstairs with a shared bathroom down the hall. The three-story monster was a 1927 farmhouse, filled with what were the original furnishings. Thankfully, no one else came to stay and share our bathroom. We endured one night there but enjoyed our other destinations.

From that vacation on, our experience caused me to be skeptical when reading travel descriptions.

But there is a travel destination, one worthy of our trust, described in the Bible. It is the perfect location, visited by reservation only. Heaven. The Bible tells us this special place is created by God Himself. Jesus is there now, preparing a place for us to dwell (John 14:2).

The Holy Bible contains no false or misleading information. Heaven is a real place, reserved for believers who have repented of sins and trusted in Jesus as our Savior, because He paid the penalty for our sins with his own blood. If we believe in our hearts that Jesus was the Son of God, died and was resurrected, then our names are written in the Lamb’s Book of Life (Acts 16:31).

God does not want anyone to perish, but all to be saved. With the life of the Spirit in us, we have already have eternity in our hearts today.

Dear Father, thank you that your Word is true and we can depend on it. In a world that is always changing and sometimes deceitful, YOU never change—We can trust you. You are the same yesterday, today, and forever. In sending your dear son, Jesus, to pay the penalty for our sins, we are given the opportunity to make a reservation in Heaven, a place of magnificence because we will gaze upon the beauty of the Lord. No disappointments there. Thank you, dear Lord. In Jesus’ name, A-men.

About the author: Fran Caffey Sandin is a retired nurse, wife, mother, and grandmother in Greenville, Texas. She enjoys baking, flower arranging, hiking, and traveling with her husband, Jim. Fran is a church organist, a core group leader for Community Bible Study, and author of See You Later, Jeffrey, and Touching the Clouds: True Stories to Strengthen Your Faith. and has co-authored others. Jim and Fran are parents of two sons awaiting them in Heaven; a married daughter and son-in-law, and three fabulous grandchildren.

Join the conversation: What are you looking forward to when you get to heaven?

Photo by Éva Balogh on Unsplash 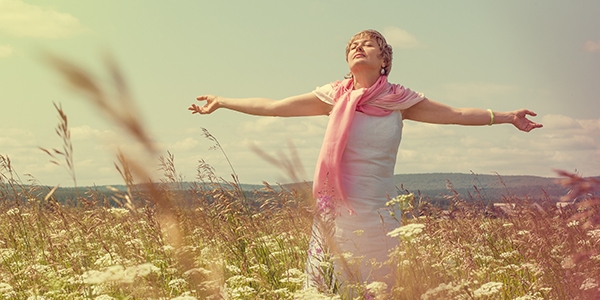 Much to my mother’s chagrin, I loved blue jeans and climbing trees when I was a girl. I’d shimmy up the trunk of a tall pine the neighborhood boy could only reach by standing on his bicycle. My trees were forts, castles in the clouds, and hot houses for daydreaming.

My arms and legs no longer scale trees or swing from branches. But I still feel the magic when I peek through leafy limbs.

A Crepe Myrtle growing beside our garage doors below our kitchen spreads its lovely branches in front of a bank of windows. When I look out from my kitchen table, my heart smiles. I’m living in a heated and air-conditioned tree house.

I wasn’t thinking about how much I enjoyed the view from trees when we picked out our house plan or when we planted the Crepe Myrtle. But God remembered.

Our round kitchen table, which doubles as my workstation, reminds me of happy times around my grandmother’s kitchen table. Max, my standard poodle, ties me to Pepper, another lost treasure from my childhood.

Jesus said, “There is more than enough room in my Father’s home. If this were not so, would I have told you that I am going to prepare a place for you? When everything is ready, I will come and get you, so that you will always be with me where I am.” (John 14:2-3 NLT).

When I recognized how God had restored these long-lost pleasures in my earthly dwelling I got excited. How much more will my heavenly home be filled with special touches that show God’s intimate knowledge of me? What deeper joys await us in heaven?

Not only does this help us face our own death, but also it softens the grief we feel when we lose a loved one. We know how much we’ll miss them. But when we remember they will be living the biggest dream of their lives, we can also rejoice for them.

Heaven will be better than all of our childhood daydreams combined. The landscape will beat any treetop view. And the air will be honeysuckle sweet.

“No eye has seen, no ear has heard, and no mind has imagined what God has prepared for those who love him.”  1 Corinthians 2:9 NLT

About the author: Drawing from her personal walk with Christ, twenty-four years as a Christian counselor, and decades as a Bible teacher, Debbie W. Wilson speaks, coaches, and writes to help others discover relevant faith. She is the author of Little Women, Big God and Give Yourself a Break. She and her husband, Larry, founded Lighthouse Ministries in 1991. Share her journey to refreshing faith at debbieWwilson.com.

Join the conversation: In what ways has God granted you the desires of your heart? How does that boost your hope for heaven?