… “If anyone is thirsty, let him come to Me and drink. He who believes in Me, as the Scripture said, “from his innermost being will follow rives of living water.” But this He spoke of the Spirit, whom those who believed in Him were to receive… John 7:37-39 NASB

In the early hours of the morning, my mouth was dry, so I turned to the side table, as usual, to take a drink from my water bottle. I took a long sip, then, naturally, headed to the bathroom. There I immediately proceeded with the up-to-the-elbows-20-seconds-of-Doxology hand sanitation. (Hopefully, we all have gotten that part down.)

However, this time, instead of focusing on the words of the Doxology, I was thinking about the water.

I was focused on the significance of our body’s makeup of 80 percent water. It’s the 80 percent that runs through the 20 percent of these skin and bones.

In fact, in Genesis 1, the Spirit of God moving across the water was the first stirring of life from the earth in Creation.

Think about it. It’s the movement of the water that sustains the 20% of skin and bones that are ripe for sickness and the breaking. But as much as we need fresh, pure water, we like to try to replace the 80 percent with inadequate substitutes: things that actually make us more dehydrated than if we would simply drink the water we need.

John 7:38 NIV says: “Whoever believes in me, as Scripture has said, rivers of living water will flow from within them.” Jesus was using the Old Testament metaphor of water that pictured the Spirit of God. He was promising new life to those that chose to believe in Him.

He described the Spirit to the woman at the well as “living water” which would forever satisfy her thirst (John 4:7-14). He told Nicodemus that “unless one is born of water and the Spirit, he cannot enter into the Kingdom of God” (John 3:5 NASB).

So when you are washing your hands for 20 seconds to keep sickness from affecting your bones, remember the life-sustaining 80 percent of you that is water. And the Spirit of God that moves within you as physical water does, bringing spiritual life. It is in the eternal filling by Him that breathes life even when this 20 percent of flesh fails.

Jesus told His disciples to “thirst after righteousness” (Matthew 5:6 NIV). Let’s not confuse that with the thirst for doing the “right things.” It’s the desire to seek after the fullness of life that the Spirit of God can bring.

So even when the rain falls in this life, let it cause us to focus on being moved in the eternal things. Let us show others it is the Spirit of God that gives us eternal life. It’s a good thing to think about while taking that extra care and attention to  washing those hands.

About the author: Amber Weigand-Buckley is editor and art director for the award-winning Leading Hearts magazine. Text LEADINGHEARTS to 64600 to get your free issue and go to leadinghearts.com to sign up for weekly 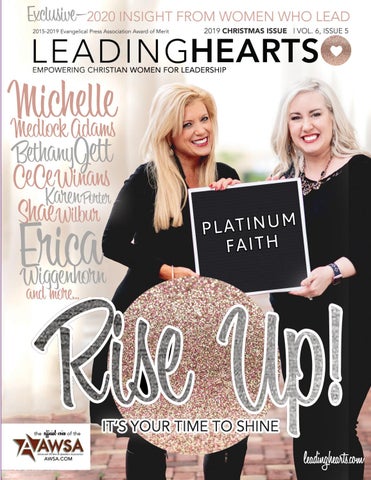 Join the conversation: What has God shown you during this time of quarantine?

2 thoughts on “The Truth from 20 Seconds of Hand Washing”